Most of us have worked in high performance teams at some time. Those were the teams that took pride in doing what others said was impossible, where debate was open and energized and sometimes at high volume, where decisions were supported 100% and mistakes were recognized and corrected without recriminations. In short, those teams operated with a high level of trust.

Social capital exists in the public arena as well. Economists measure social capital according to community levels of contributions to charity, participation in religious and other civic organizations, volunteerism, voting and compliance with laws and regulations in general. It is a measure not only of trust in community and government institutions but trust in individuals as well.

The classic survey question to measure social capital is: “Generally speaking, would you say that most people can be trusted or that you can’t be too careful in dealing with people?”

Social capital has powerful externalities. According to noted researcher, Robert Putnam, “much evidence suggests that where levels of social capital are higher, children grow up healthier, safer and better educated, people live longer, happier lives, and democracy and the economy work better.”

High social capital exists most easily in communities that are stable and homogeneous. That is, they have low levels of diversity and low mobility. There are some exceptions. Silicon Valley and Boulder, Colorado stood out in Putnam’s 2007, study E Pluribus Unum. Despite the high ethnic and racial diversity, it is possible that their ubiquitous entrepreneurial culture overpowers whatever distrust may derive from the traditional cultures of the residents.

This brings us to some thoughts about how social capital is affected by government-required behavioral changes in response to the pandemic. At a basic level, some of the measures imply that we should not trust each other. The facemask is a classic social capital element. You wear it to protect others, rather than yourself. So, I wonder are those mask-less walkers I see on my daily run around Lake Merced just forgetful or are they trying to kill me with this disease?

If compliance with government edicts is a measure of social capital, pre-virus, the U.S. had a good capital base. For example, income tax compliance at 86% is one of the highest in the world. 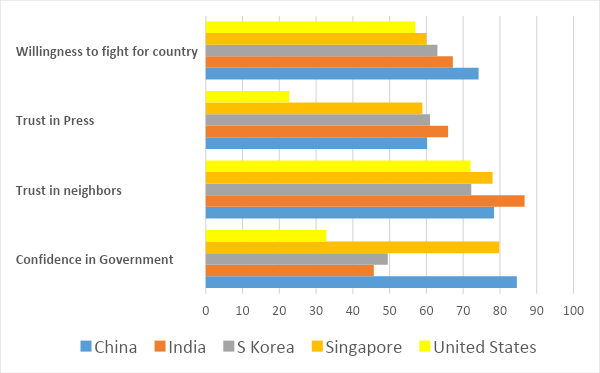 The chart nearby from the World Values Survey (WVS) in 2007 offers some comparatives on social capital. Those living in more authoritarian countries (China and Singapore) have more confidence in their governments, making it perhaps easier to command and control the public response to the pandemic.

Initially, compliance with virus measures in the U.S. was strong despite the significant social costs and horrific economic costs. Parents and grandparents die alone, and their families grieve without funerals or support from religious organizations. Firms built up over a lifetime are washed away in bankruptcies. Forty million are unemployed.

Now, however, there are signs that this social contract is cracking.

First, the credibility of the health experts is slipping as their models and predictions prove increasingly erroneous. In truth, they never had the certainty we all projected onto them. They are scientists, after all, and science evolves as new facts emerge.

After 90 days of pain, social capital in the U.S. is beginning to breakdown. A millionaire friend told a story about seeing her hairdresser in the back alley behind her shop so as to not put her license at risk. There are full-throated defenses of religious freedom coming from normally reserved and conservative pastors nationwide. Public protests over states’ economic blockades are larger and more frequent.

The public health experts, the media and the politicians have conditioned us to fear strangers and, on some level, even our neighbors. What are the long-term implications?

A recent study* of the descendants of those who lived through the Spanish flu of 1918 found that the mistrust engendered had important long-term effects on their behavior and social interactions in later generations. The study found a negative and statistically significant effect of the Spanish flu on trust. “An increase in influenza mortality of one death per thousand resulted in a 1.4 percentage point decrease in trust. “

The Spanish Flu lasted only 15 months until it stopped killing after an estimated 500 million infections and 50 million deaths. Amazingly, the loss of trust and reduced social capital is carried by the descendants of those affected four generations later.

Based on the history of the Spanish Flu, what economic expectations should we have for our current situation?

In 1920, the economic outcomes diverged between Europe and the US. In Europe, the recovery was slow and arduous as they contended with over 15 million killed in WWI in addition to the loss of life from the flu. Their economies were constrained for years by a classic loss of labor not unlike the medieval Black Plague, albeit at a smaller scale.

In the U.S., the loss of life from WWI was 117,000. Even when added to the 675,000 deaths from the flu, the impact was still relatively small on total economic capacity. Importantly, no major industries were shut down, as production for the war effort was a priority. Increased manufacture of war supplies offset declining consumer demand. In 1919, GDP actually grew by 1%. The ensuing recovery was rapid.

Today, much of the economic damage has already been done, not due to loss of life from the virus but, rather, to the loss of jobs from government actions. Skipping a few months production is not the end of the world for aggregate supply, but 25% unemployment will have long lasting effects on consumer demand.

Finally, the loss of social trust can also constrain the economic activity.

Today, a ‘V-shaped’ recovery seems less and less likely as the months of government restrictions are extended.