“Only a crisis – actual or perceived – produces real change. When that crisis occurs, the actions that are taken depend on the ideas that are lying around.” – Milton Friedman

When the COVID–19 virus began traveling the earth, the ideas that were lying around dated from the Spanish Flu epidemic in 1918 and the depression in the 1930s. As Friedman predicted, those are the actions we’ve taken.

The government employed these antique blunt instruments forgetting any technological advances that could provide a more nuanced analytical framework to battle this disease. How is it that vendors can micro target me with ads for the precise wheels I want for my Wilier Triestina but we have no capacity to use the same skills to evaluate my virus vulnerability?

Everyone understands that the 1918-style social and economic lockdown would distribute the infections and deaths over time while not reducing the total number significantly. The goal was to save the hospitals from being overwhelmed. We wanted to make sure all had access to ventilators. (Note that 90% of those who went on ventilators in NYC did not survive according to JAMA, April 22, 2020).

Today, hospital ships and field hospitals are almost empty and there are ventilators to spare. The models that forecast a 40,000-ventilator requirement for Governor Cuomo in New York were off by a factor of four. Hospitals are advertising again their elective surgery services.

Just in the last week, the estimated total number infected has gone from thousands to millions and the attendant death rate has dropped to 0.12% to 0.2%, based on recent studies in Santa Clara County and New York. Clearly the health experts are operating in an environment of extreme uncertainty.

The decisions to lock down citizens were based on models that now have demonstrably poor predictive power. But the damage is done with unemployment claims of 26 million or almost 17% of the workforce. The first quarter GDP print was -4.8% and Q2 may be worse. Never before has the economy fallen so far so quickly.

To mitigate the emerging economic disaster, we broke the glass and took out the monetary and fiscal policy fire hoses. The annual budget deficit is nearing $3.7 trillion. At the FED, if Bernanke was “helicopter Ben,” then Powell is “Jumbo Jet Jay,” dumping liquidity from the cargo hold of a 747 rather than a mere helicopter.

So how do we get out of this hole?

Many states have formed committees to decide how to “open the economy.”

These appointed groups of central planners harken back to the 1933 National Industrial Recovery Act. The NIRA produced thousands of regulations to control virtually every aspect of the supply of goods, services, and labor down to the tiniest detail. Free-market capitalism was set aside. Competition, seen as a core problem, was proscribed and the existing dominant players were entrenched in monopolies.

What is the probability these committees will make foolish decisions, twisted by ideology, as they did in the 1930s? In San Francisco, where even fortunetellers need a license to operate, it is not hard to imagine the central planners creating criteria for each business to “shape the post-corona” economy. Imagine bars with regulations about free peanuts and coaster placement – all in the name of protecting the public’s health.

Unfortunately, these new regulations will not ease the public’s key concern. In order to give the citizens confidence to return to their jobs, their favorite restaurants and shops, we need to assuage fear that has been promulgated over the past weeks.

As FDR put it, “the only thing we have to fear is fear itself.”

What is the market reaction? 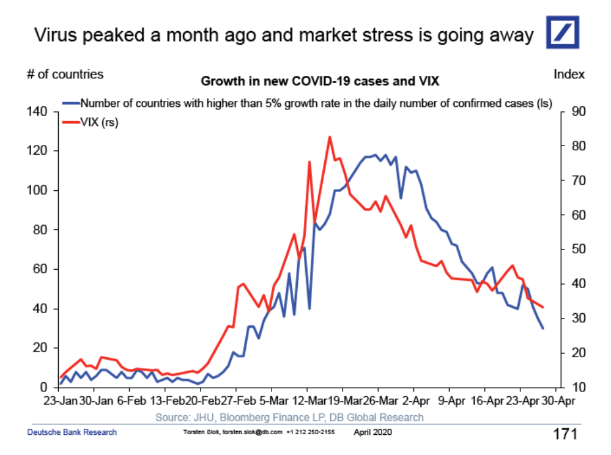 Market participants are struggling to assess all this – the uncertain medical experts, the SWAG-type epidemiological models, the volatile and panicky politicians and journalists.

The VIX (a measure of market volatility) hit an 11-year high on March 20th, reflecting a lack of visibility on post-COVID valuations. New virus cases and the VIX are detailed in the nearby chart.

The core public policy question boils down to this: How much pain should the general population endure to try to protect everyone from a disease which has a 98.5% recovery rate? Usefully, the hoi polloi are taking a step back and making their own assessments of the risk.

After all, it is important to remember that the government created this economic dislocation directly. There is no question that the panic among the media and government officials is real, but as common sense takes hold, more people are wondering, is it reasonable?